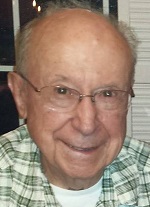 Walter Muench, 95, passed away peacefully on December 6, 2021 surrounded by his loving family.

Walter lived a full and blessed life. He was born and grew up in Brooklyn, New York to Walter and Anna Muench. Walter married Joan Schildwachter in 1948. She was the love of his life. He served in the U.S. Army during World War II as a Technical Sergeant. He then graduated from Brooklyn Polytechnical Institute as a Mechanical Engineer and received his Master’s Degree from New York University. He worked for Foster Wheeler Corporation for ten years and then had a twenty year career at Grumman Aircraft Corporation working on projects ranging from aircraft design, satellite testing and design and the launch of the Ben Franklin submersible.

After retiring from the engineering profession he followed his passion serving the Lord Jesus Christ and was ordained a minister of the Gospel through Pinecrest Bible College. In partnership with Joan, he pastored The Church at Hicksville on Long Island and then Bethany Home Fellowship in Washington, North Carolina. He also was Principal of schools at both locations. Many lives were blessed by Walter and Joan.

Walter also enjoyed woodworking and made many creations for family and friends.

Walter is preceded in death by his parents- Walter and Anna (nee Heinrich) Muench, and his sister, Elizabeth “Betty” Schildwachter (nee Muench) and her husband, Daniel Schildwachter, Jr.

He is survived by Joan, his wife of 73 years; his children and their spouses- Walter Jr. and Denise (nee Maloney), Thomas and Joan (nee Tsutsumi), Kathryn Muench Spada, and Timothy and Doris (nee Earl). He and Joan also have fourteen grandchildren and nineteen great-grandchildren all of whom were greatly loved by Grandpa.

Walter is now with his Savior, the Lord Jesus Christ and all the saints in Heaven.

His interment will be in Glenwood Memorial Gardens in Broomall, Pa.

In lieu of flowers, contributions made to Penn Medicine Hospice, 150 Monument Road, Suite 300, Bala Cynwyd, Pa. 19004 would be appreciated.