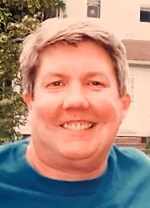 Shawn was the son of the late Thomas and Janet (nee Iredell) Gross. Shawn was a 1987 graduate of West Catholic Boys High School. He settled in the Northeast section of Philadelphia where he remained for the next 30 years working and making good friends who looked out for him.

He absolutely adored his nieces and nephews and cherished his role as “Uncle Shawny”. He took his role very seriously as Godfather to several of them. Whether it was a football game, birthday party, graduation or a tap dance recital, Shawn was always front and center cheering them on. He was so proud of them and their accomplishments.

He thoroughly enjoyed family vacations, especially our mountain and camping trips as he would literally be the life of the party. He made you laugh even if he wasn’t trying. He was a simple man who loved life and lived it to the fullest. After his family, his second love was his sports and playing the lottery. He was an avid Phillies, Flyers, and Dallas Cowboys fan.

Shawn will be sorely missed by his family. He is predeceased by his brother Thomas J. Gross III.

Burial will be at Holy Cross Cemetery.