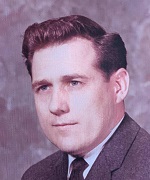 He served in the United States Marine Corp during the Korean Conflict. He was a volunteer firefighter with Cardington Stonehurst Fire Company. Joe was an Electrical Engineer being employed at Westinghouse, United Engineers, Gilbert and Assoc., and PP&L.

Despite spending much of the last two years in and out of hospitals and rehabs, Joe was fortunate to spend his last few weeks at home surrounded by his family, friends, and fur babies with laughter and love. He died peacefully at his home, per his wishes, in Downingtown, Pa.

Joe truly enjoyed all 88 years of his life and has many people to thank for making that possible. He was preceded in death by his parents Elizabeth and Joseph Fuhs, sisters Elizabeth (Snookie) wife of Carmen Della Polla, Mildred (Tootsie) wife of Jack Graham, and Gara wife of Raymond Jones.

His survivors are wife Barbara Fuhs; daughters Lorraine Weeks wife of Robert Weeks, Joann wife of David Hardy, Janine wife of David Civitello, Christine wife of Matt Williams, Michele Bowman; son Joseph and partner Richdeana Jones along with two step-children Mark and Marcy Girton. Joe has 15 grandchildren, one step-grandson and 12 great-grandchildren with one Civitello in the oven along with numerous nieces and nephews.

Joe spent many of his early years on bowling teams and acquired an abundance of trophies. He then transferred his interest into restoring old collectable Mustangs. He was notorious for having a weed free lawn and spent many hours a day in his yard with his lawn and vegetable gardens. He had an abundance of fruit trees which we all enjoyed. Joe was quite the handyman repairing and improving on his homes without the need of a professional. He loved the Eagles, Phillies, and the Steelers. And Joe was quite the dancer being the first on the dance floor at weddings.

Joe knew the Lord as his personal Savior and fills our hearts knowing that we will see him again in Glory.

Joe was a charitable man. So, in lieu of flowers, memorial contributions may be made to a charity of your choice.