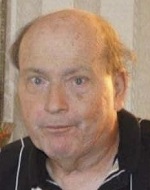 Heaven has just received a great warrior:  John Joseph Magowan.  John was called home by his Savior on Monday, August 23, 2021.

He was born in Philadelphia but was a longtime resident of Norwood, and then Woodlyn, Pa.

John was born on December 28, 1948, weighing just 2.2 lbs, so he began his life as a warrior.  John continued his fight and survived many operations at Shriners Hospital to enable him to walk and suffering both day and night pain, he was eventually able to walk on crutches.  John continued his battle with Cerebral Palsy for all of these 72 years.

John was the son of George (Chuck) and Catherine Magowan of Norwood, Pa.

John met his wife, Debra, at Johnstown, Pa. and they married in 1976.  They moved to Delaware County.  John and Deb worked long hours together in his pretzel business.  They worked, played, and traveled together.

For the past two years John has been bed-ridden and has required round-the-clock Nursing Support and then additional support since Debbie’s passing on February 1, 2021.

John will be missed greatly by the Magowan/Hegarty family, the Gorman and the Herbert families, his many longtime friends, and his many caring Pretzel customers.

There will be a visitation time on Saturday from 10 A.M. to 11 A.M. at the funeral home.

In lieu of flowers, donations to The YOLO Foundation (for people affected by ALS) c/o William Herbert, 609 E. Winona Ave., Norwood, Pa. 19074 would be appreciated.