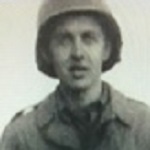 He was born in Lester, Pa. to Martha and Oskar Lehman on February 7, 1924.  He graduated from Ridley Park High School and enlisted in the Army during World War II (TEC 5 BATRY B 563rd AAWN BN).  During his service, his engagements included Rhineland, Ardennes (Battle of the Bulge), and Central Europe.  Upon his honorable discharge, he married Neva Martin and settled in Essington where he assumed responsibility for his family’s business, the Tinicum Inn.

He was active in Masonic life, and enjoyed coin collecting, following Philadelphia sports, and World War II history.  In his later years, he became a connoisseur of local diners in the Pa. and NJ region.  He took particular joy in his family, and enjoyed taking his seven grandchildren on various adventures in the region.  He was a beloved grandfather, and in his later years became a great-grandfather to thirteen great-grandchildren.

He was preceded in death by his parents Martha and Oskar; brothers Carl and Oskar; and his wife Neva.

His services and burial will be private.

Donations may be made in his memory to the Tunnel to Towers Foundation at t2t.org