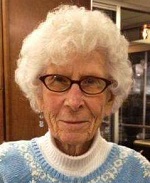 Born in Ridley Park, she was the daughter of the late J. Harvey and Sadie C. Hart.  She was a 1947 graduate of Ridley Park High School and a 1951 graduate of Temple University where she was an outstanding athlete in field hockey and lacrosse.  She received her Masters in Education from West Chester University in 1964.

Gladys spent a dedicated lifetime in education and coaching.  She taught math, social studies, health, and physical education at Marcus Hook School from 1951 to 1954; then at Richardson Park in Delaware from 1954 to 1955 and then at Interboro Middle School from 1955 to 1957.

Gladys also taught health and physical education at the Springfield School District from 1957 to 1987 and was best known for her coaching in hockey, basketball, and lacrosse there.
She was a member of the Springfield High School Hall of Fame.  Gladys retired in 1987.

After her retirement, Gladys was a substitute teacher at the Delaware County Intermediate Unit; taught physical education and was the coordinator for the after-school program at the Frederick Douglass Christian School; and worked at the Springton Tennis Club for a period of time.

Gladys was a Charter Member of The Blue Church in Springfield, Pa.; where she taught Sunday School and Vacation Bible School and was a member of the Pioneer Club.

She is the sister of the late Dorothy Hart.

Gladys is survived by her church family.  She will be fondly remembered by the many students whose lives she influenced during her teaching and coaching years.

Contributions in her memory to The Blue Church at the above address would be appreciated.