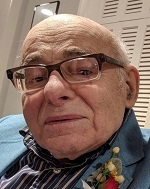 He was born in Algoma, WV and graduated from Northfork WV High School.  Frank worked as a riveter for Fairchild Aircraft in Hagerstown, MD before serving courageously in the U.S. Army during World War II in Europe, participating in the Battle of the Bulge.  He earned an accounting degree from Temple University and worked as a CPA in public accounting and for the US Navy in a civilian role.  Frank’s favorite pastime was gardening, which he enjoyed late into his years.  He also enjoyed reading books and his financial and health newsletters.

Frank is predeceased by his parents Felice (Fell-E-Chay) and Francesca Cartularo; sisters Teresa Cartularo of Philadelphia/Norwood and Marianna (the late Dominic) Spadafore of Roseville MI.  He was loved and respected in life by his late brother-in-law Francesco Calabrese and his late sisters-in-law Mary (the late Attilio) Longino and Madeline DiCristo Calabrese.

The family will be receiving guests at the Griffith Funeral Chapel, 520 Chester Pike, in Norwood, Pa. 19074 on Wednesday, August 18th.  Visitation will begin at 10 A.M. and the Memorial Service will begin at 11 A.M.  His interment with honors will be at Washington Crossing National Cemetery in Newtown, Pa. at 2 P.M. Wednesday.