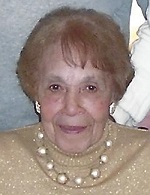 A strong woman is a woman determined to do something others are determined not to be done.  Often, we look for examples of what to do and how to do it, and those around us can be an excellent source of direction and sometimes inspiration.  Charlotte Lacey Bagby lived an inspired life showing her children, grandchildren and many others what could be done when we live a life with strength, compassion and perseverance.

Born to Mathilda R. Lacey on February 23, 1920, Charlotte grew up in Darby, Pennsylvania.  Along with her mother, she was nurtured by her Aunt Josephine and Uncle Richard.  The oldest of twelve children, Charlotte learned early on the drive and heart required to care for others.  She received her education in Darby and as she matured, Charlotte discovered a talent for art and a love for animals.  After graduation she became the wife of Leroy Robinson and to this union were born three children; Leroy Jr., Gloria, and Charlotte.

When the United States entered World War II, Charlotte faithfully served the Defense Department.  Certainly her work helped to support our nation as we fought to defeat an oppressive enemy.  While working and caring for her young family, Charlotte still had time to pursue her art and acquire a patron.  She declined; however, an invitation to continue her studies at the prestigious Barnes Foundation; choosing instead to care for her children.

Later, Charlotte welcomed another daughter to her family, Anita, then with the close of the war, she began employment at Virginia Donut.  The highlight of her working career occurred when she began employment at the University of Pennsylvania where she dutifully worked until retirement serving for eighteen years.  Finding love again, Charlotte became the wife of Ernest Godfrey Bagby.  They would complete the family with two more children, Brenda and Dale.

Charlotte would go on to express her creativity with sumptuous meals particularly her rich, and tangy lemon meringue pie and undeniably pressed to perfection garments.  She loved to travel and continued to aid others always ready to comfort those who were hurt or in need.

Charlotte Josephine Lacey Bagby passed away on September 22, 2021.  She was preceded in death by her son Leroy Jr.  She leaves to cherish her memory:  five children; Gloria, Charlotte, Anita, Brenda, and Dale.  One brother; Joseph Andrews; fifteen grandchildren and twenty-two great-grandchildren, a host of loving nephews, nieces and friends.  Life is not easy for any of us.  But what of that?  We must have perseverance and above all confidence in ourselves.  We must believe that we are gifted for something and that this thing must be attained.  Thank you for your life Mother, Mom Mom, Sister, Cousin, Friend; because of you, we have a better idea of how to live life.

Relatives and friends are invited to her Funeral Service and Life Celebration on Thursday, September 30th, 2021, at 11 A.M. at the Griffith Funeral Chapel, 520 Chester Pike, in Norwood, Pa. 19074.

Interment will be in East Lawn Cemetery in Milmont Park, Pa.