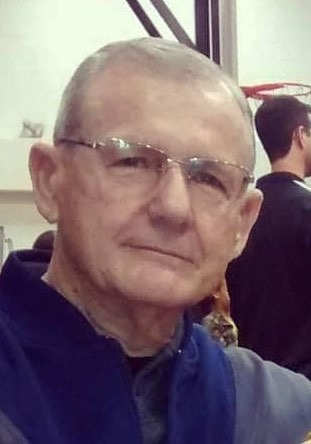 Pat was the second born son of the late Mary (Clay) and Albert Barr. Born on March 15, 1935 in Philadelphia, he along with his 7 siblings were then raised in Tinicum Township, Pa, where he would go on to raise his 6 children alongside the love of his life and devoted wife of 68 years, Carol (Krough) Barr.

Pat was a proud U.S. Navy Veteran, selflessly serving his country from 1952 until his honorable discharge in 1960. In fact, Pat was so dedicated to his service that he may or may not have “accidentally” changed his birth year to 1934 when enlisting so that he could join the ranks and protect our freedoms at the ripe old age of 17.  He loved recounting the stories he collected and friendships he forged when he was an Engine Room Mechanic aboard aircraft carriers: F.D. Roosevelt and Coral Sea. You would often find him sharing these moments with a captive audience of grandchildren, and inevitably closing the story with “now remember, this was a time when ships were made of wood and men were made of iron”,  which would then be followed by his signature belly laugh and snort, sending the entire room into an uproar of contagious laughter.

While his years at sea were entertaining, it would be a seemingly mundane day on land with his Navy buddy that would change the course of his life forever. On that fateful day in 1953, Pat tagged along while his friend visited his girlfriend Ruthie in Pennsville, NJ. Thankfully for Pat, Ruthie’s friend Carol stopped by hoping to roller skate, and it was love at first sight for both of them. Needless to say Carol never did get to roller skate that day, but she did meet the man she would marry the following summer in June of 1954. The two would go on to have 6 children together. Three daughters whom he adored, Kathy (Wayne) Szynal, Karen (Chuck) Owens, and Joanie (Chuck) Cook, and three sons who he was endlessly proud of, Pat Jr. (MaryJane), Stephen (Pamela), and Kevin (Melanie).

After the Navy, Pat attended the Spring Garden Institute in Philadelphia where he studied transmission repair, and would go onto become a master of his trade. With the unmatched support and encouragement of his wife, he would dedicate every moment spent away from his family building his business, ‘Pat’s Transmissions’. Pat’s Transmissions opened its doors in service of Delaware County and the surrounding area in 1966, quickly becoming a successful small business thanks to the uncompromising values that the business was built on. Pat “retired” in the late 90’s, but anyone who has visited Pat’s Transmissions in Folsom Pa, would be surprised to hear that he was no longer the acting full-time business owner. At some point everyday you could still find Pat busying himself around the shop, catching up with the guys, or getting insider info from his daughter in law MaryJane who has played an equally valuable role in the front office for upwards of 20 years. The business is now proudly owned and operated by Pat Sr.’s three son’s Pat Jr., Stephen, and Kevin, who have continued to uphold the highest standards in their field and remain a highly respected small business in Delaware County.

In his free time Pat loved spending time with his wife attending their 20 grandchildren or 27 great-grandkids events, heading to the casino to play/win a few hands of poker, or simply relaxing in his recliner while they watched his beloved Judge Judy. He was a man that loved routine, and a large part of that was sharpening and pumping the iron at Planet Fitness in Clifton Heights. For years he could be found at the same time multiple days a week setting records at the bench press, and he maintained that schedule until just a few months ago. There, he met a group of guys that grew to be dear friends. He was also very confident that he acquired an untold amount of adoring fans, which comes as no surprise. His favorite day of the week however, was Tuesday. Every Tuesday for years, he and his beloved brother and best friend Robert would spend the day together. It didn’t matter if it was a day running errands, going out to lunch, driving to pick up a part for the guys at the shop, or going to a doctors visit, as long as they were together it was going to be a good time, and that was evident to anyone within an ear shot of them. Their nonstop roars of laughter were contagious and spread to everyone in their presence. It was unlikely that either of them could stop laughing long enough to clue others in on the joke, but 9 times out of 10 it was the retelling of one of the many ridiculous moment they shared over the years. Those Tuesday’s, and the whole of his years, was spent doing a collection of “the little things”, but it was in doing the little things with intention and purpose with the people he loved most, that made for a full and beautiful life.

Pat will be deeply missed by many, especially his devoted wife of 68 years Carol (Krough) Barr, and his immediate and extended family who loved him deeply. While he did not ascribe to any organized religion, he lead an honorable life guided by the golden rule; “do unto others as you would have them do unto you”. His beliefs and subsequent actions were guided by his values, unwavering integrity, and finely tuned moral compass. He will be remembered for his unmatched work-ethic, incredible and wide-reaching generosity, his quick wit and hysterical sense of humor, his famous laugh that would make everyone in the room feel like they were a part of something larger than life, and his never-ending pursuit of greatness. They broke the mold when they made him, and he broke every record he came across. His legacy is one that will positively impact the world for generations to come, and although the world will never be the same without him, we find solace in knowing that while he is waiting to be reunited with the love of his life, he at least has the company of the person who makes him laugh the hardest, himself.

Pat Sr. is survived by Carol Barr his loving wife of 68 years, his six adoring children Kathy Szynal, Karen (Chuck) Owens, Joanie (Chuck) Cook, Pat Jr. (MaryJane), Stephen (Pamela), and Kevin (Melanie), his biggest fans and favorite buggers his 20 grandchildren and 27 great-grandchildren, and his brother Robert (Sally) Barr, and sister Janice Turnier. He was also a loving Uncle to many nieces and nephews who loved him dearly and a treasured friend to many.

Interment will be private at a later date.

Family and Friends are invited to attend a luncheon immediately following services:

In Lieu of flowers the family invites you to make a donation if you feel called to do so: